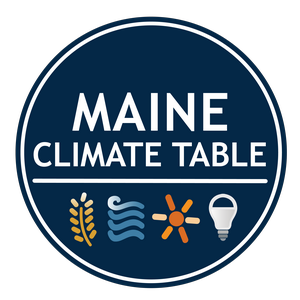 Climate change has become one of the most politicized issues of our time.  Regardless of how this divide came to be, it’s going to take both Democrats and Republicans to solve the climate problem. This was the motivation for my recent interview with Shawn Moody, Maine’s 2018 Republican gubernatorial candidate. Shawn lost the 2018 election to his Democratic opponent, Janet Mills, but still won the support of 272,311 Maine voters—no small following.

I found several in my interview with Shawn.

First, Shawn abhors waste.  Wasted energy.  Wasted material.  Wasted car parts— the basis of a successful business he built while still in high-school.  Shawn has done more for recycling than any Democrat I’ve known.  He integrates recycling through every aspect of his business.  Recycling and energy efficiency are the most basic tenets of climate action.  We are not divided on this.  But you would never know it based on the political discourse today.

Second, Shawn believes in giving his employees a voice.  This is why he built his latest business—Moody’s Collision Centers—so that its 240 employees own one-third of the company.  The company’s books are open to all employees, who receive 10% of the company’s profit.  The employee-ownership model is one of the most effective “instruments” for reducing inequality in our society—again, a passionate issue for Democrats.

Third, Shawn believes there should be a level playing field for businesses in the U.S. with other countries.  If U.S. businesses are meeting high environmental and social standards, imported goods should be subject to the same standards.  He is not for lowering our bar, but for raising theirs.  This is, or was, a prime Democratic talking point at one time.  He believes our congressmen and senators should be demanding a level playing field in international trade.  He wonders why Democrats and climate activists are not focusing on this.

Fourth, he does not want Mainers who are working hard to get by week-to-week to pay a disproportionate share of fixing the climate problem.  This sounds like climate justice, the same thing I hear from Democrats every day.

Of course, there are some core differences.  Shawn believes in the practical, problem-solving “can-do” approach of the business sector.  His view is “tell us the destination and let the private sector figure out how to get there.”  The problem is not so much with this approach as that we, as a collective society, have not yet figured out what we want the destination to be on climate change.  The unfortunate politicization of climate change over the last two decades has slowed us down.  We could have solved the climate problem by now if we could have agreed on the destination a decade or two ago.

By taking the time to listen and understand what Shawn cares about I realized we have been squandering time.  A progressive Democrat and a Republican with 272,311 more supporters than me have a lot in common.  There is plenty of work we could be doing together to make the world a better place—work we should be doing together

Somehow, we all need to break free of our cultural blinders.  “You’re either with me or you’re against me” doesn’t allow for listening.  Where has that approach gotten us?

A good antidote to the growing polarization is to find someone who thinks differently from you and listen carefully and patiently until you feel you understand how they came to that viewpoint. The result is likely to be what happened in my interview with Shawn—the uncovering of commonly-held values on which we could act together.

Listening doesn’t mean compromising your own values.  However, seeing the world through someone else’s eyes will inform you, and likely broaden and enrich you as well.  Most importantly, listening will reveal solutions you would have never found otherwise—solutions that work for everyone and bind us together, regardless of our politics.

Deep listening is hard work and takes patience.  Some will argue we don’t have time to take this approach.  But we will solve the climate challenge faster by slowing down, listening, and building relationships based on trust.  As Shawn said, “it’s going to take everyone.”

Paraphrasing from the book “7 Habits of Highly Effective People,” Shawn concluded the interview with— “If you want to be understood, first you have to understand.”

The Climate Common is about understanding, so we can solve this climate problem.

If you watch the interview, tell us what you think.

Want to join the discussion?
Feel free to contribute!